THE LITTLE RINK THAT COULD

For the past 15 years the Bogert Park Pavilion has been a great place to play hockey. Kids and adults have learned to skate and play hockey under the graceful curve of the Pavilion’s roof. Every year between November and April, boards are installed, water is sprayed and ice is resurfaced. All of this by volunteers from the Bozeman Amateur Hockey Association (BAHA). It was not always this way. This history of the Pavilion is a reminder of the events and people that have helped evolve this rink to where it is today.

In 1977 the Bogert Pavilion was constructed, with federal funds, for the specific purpose of creating a covered ice rink. The Parks and Recreation department was in charge of flooding the rink, but citizens were allowed to set up some boards and play “pick-up” hockey. These warped and weathered boards were tongue and groove style boards nailed to vertical 2x4’s. The boards were less than adequate, but without an organization, it was difficult to raise any money for new boards. Even with this minimal facility (compared to what we have today) hockey players thoroughly enjoyed themselves!

In 1983 the Bozeman Amateur Hockey Association was created by Bill Snyder and 3 other officers. BAHA’s purpose was to work with the City Recreation Department to improve the ice conditions at Bogert Park. BAHA was able to provide the City Rec. Department with updates on the ice conditions and patch holes in the ice. It was recognized that the boards were insufficient and so in 1984 the City required BAHA to build new boards. BAHA collected donations from businesses throughout the city and built new, safer boards that were in use until two years ago. In 1984 BAHA began to organize youth and adult hockey programs. All of these activities were done without lights and changing rooms, so in 1985 BAHA split labor/material costs with the City of Bozeman and constructed support buildings and put up the lights that exist today. The City allowed BAHA to begin charging its members dues in exchange for liability waivers signed by each player. Initially adults were charged $20.00 and kids skated for free.

In 1989, the City required BAHA to become insured up to $1 million of general liability coverage. This was for BAHA’s protection as well as the City’s protection in case an injury occurred at the Pavilion. BAHA was able to find an insurance group to cover this liability: USA Hockey. The requirements for this coverage are that all hockey players must register, pay the premium and wear helmets. Children must also wear full protective gear. This was a positive step forward in providing quality programs to adult and children hockey players because it allowed BAHA to join a state-wide organization and play teams from around the state in an organized fashion. Kids’ teams were split by age group and competed with other teams from other cities. A season’s pass for adult and youth hockey players at that time was $45.00 per person.

In 1994 BAHA purchased an ice resurfacer and added hot water tanks to the support building, after which the City relinquished responsibility for making ice. This was a huge evolution in creating consistent ice at the Pavilion. Previously, players had pushed heavy steel shovels fashioned from 50 gallon drums to shovel the ice. This was a great way to warm up for the ensuing game, but detracted from the amount of playing time. Also, shovels cannot scrape off a top layer of ice and add a new layer of water in its place. BAHA was now able to flood every night, if needed, to quickly get the rink back after a warm spell, and to plane the ice surface. Indirectly, BAHA improvements at Bogert enabled better ice at the other rinks around town because the City Rec. Department was now able to spend more time flooding them. The program continued to expand with extra hours after school for the kids and more time at night for the adults.

In 1998 BAHA purchased new boards and glass. These boards are made from steel and plexiglass and should last a very long time. They were acquired with the vision of surrounding a refrigerated ice surface, for which BAHA had been hard at work seeking equipment and political support for several years. After the Valley Ice Garden decided to form its own hockey organization in early 1999, BAHA poured all of its energy into locating and finding a home for its proposed refrigerated ice system. After discussions with the City and County Commissions, and eventually the County Fair Board, arrangements were made to move the home of BAHA to a new Pavilion at the County Fairgrounds, to be constructed and funded by those partners and Barnard Construction. As deadlines for permitting the new Pavilion passed, BAHA determined that it would have to stay at Bogert Park for one more season. The City granted BAHA one more year at the pavilion, with refrigeration, as long as the noise level was acceptable to the surrounding neighbors.

And that brings us to where we are today. The Bogert Pavilion has been home to hockey players for almost 25 years and has served its purpose extremely well. Throughout all of the years, the centerpiece of the rink has been the Pavilion. Without it, none of the other additions would be as useful as they are today. One good snowstorm, or a sunny day would ruin the ice for the next 3 days. BAHA will miss the old Pavilion, but will go on providing affordable, accessible ice to the community under the new Haynes Pavilion at the Fairgrounds, which quite soon will feel just like home. 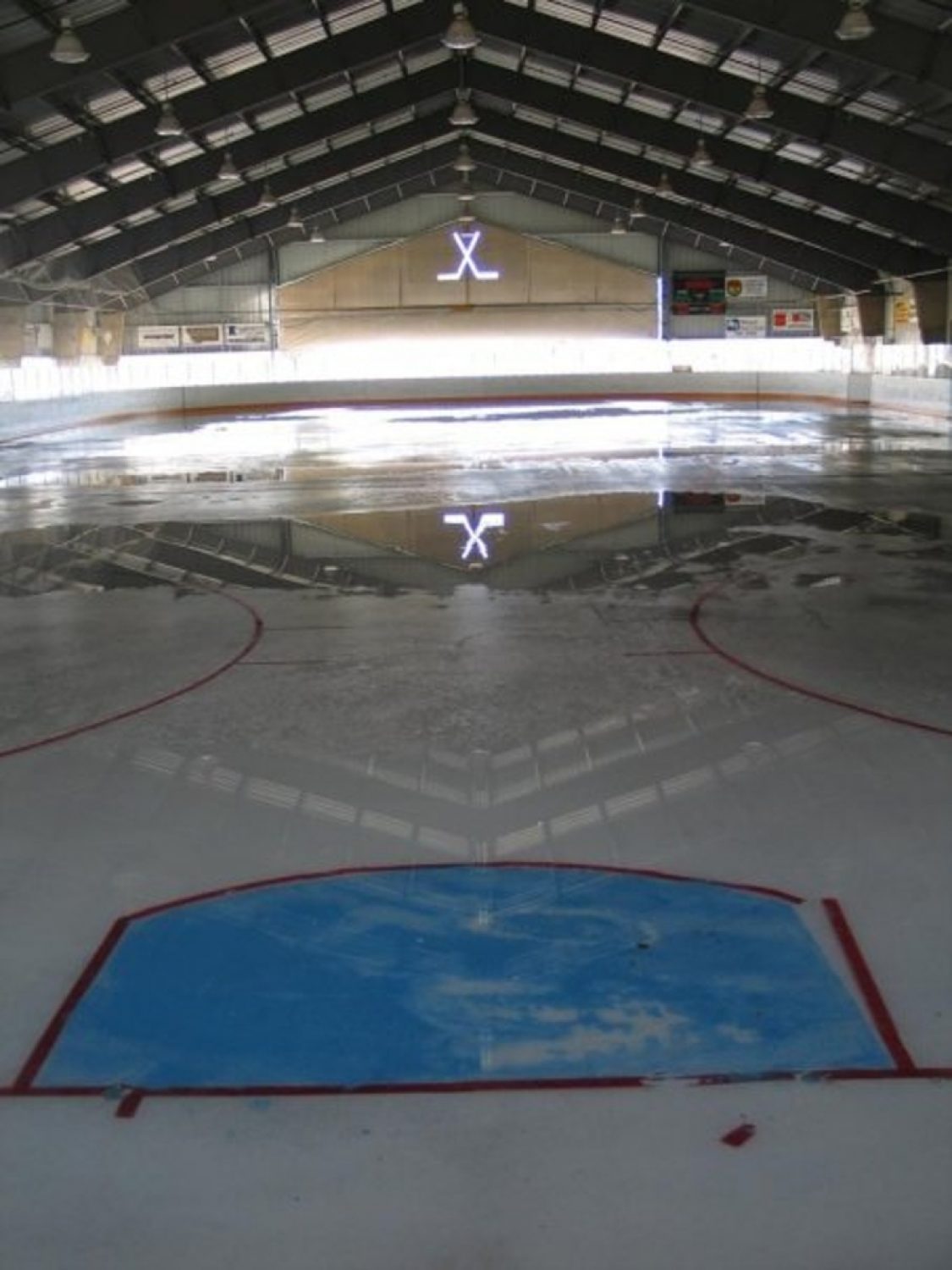 The story of the funding and construction of the Haynes Pavilion in Bozeman captures the spirit and teamwork of the community itself.

Starting with a dream of building a refrigerated ice rink, the Bozeman Amateur Hockey Association (BAHA), The City of Bozeman, and Gallatin County were joined by area businesses in constructing the area’s first outdoor pavilion and refrigerated ice rink. The year-round recreational facility, which took less than a year to construct, is now valued at more than $1 million but required less than one-quarter of that in public funding. The project was made possible largely by the hard work and generous contributions of BAHA volunteer labor, area suppliers, and specialized services.

So successful was the effort to build the pavilion, that the players of the National Hockey League through the NHLPA Goals and Dreams Fund contributed $60,000 toward completion of the refrigerated flooring system and mechanical rooms. Local banks rallied to help hammer home warming rooms in time for the season.

In it’s first year, the pavilion and rink accounted for more than a quadrupling the number of skating days available in the city. The youth hockey program doubled in size, and new programs were launched, including a girls hockey program. And now with warm weather coming, the pavilion is being used for diverse activities such as roller-blading, concerts, and markets.

Improvements to the pavilion continue; additional changing rooms and restrooms are being added, again mostly with volunteer labor and materials, but also with public support. Landscaping and viewing improvements will follow. 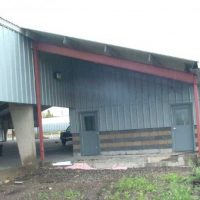 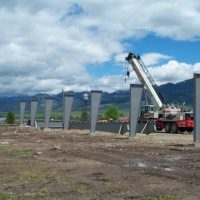 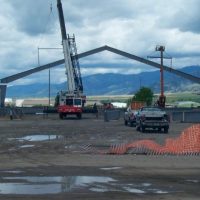 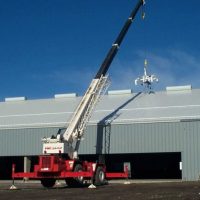 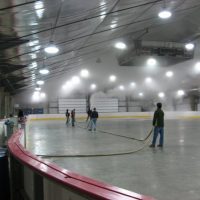